Are you wondering if a bomber really crashed into the Empire State Building? Did someone actually survive in the elevator that fell 80 floors in the aftermath of the crash? Is Higgs Point a real neighborhood?

Yes, real events and places inspired the otherwise entirely fictional THERE WAS AN OLD WOMAN.

Here are answers to some of the questions readers ask me —

Did a bomber really crash into the Empire State Building in 1945? 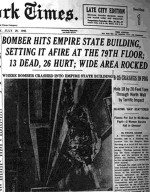 Here’s a vivid account of the moment in an excerpt from Hilton Obenzinger’s “New York on Fire:”

Colonel Smith lowered the landing gear of the B-25 thinking he was about to land in Newark when through the fog he saw that he was heading directly for Radio City Music Hall. Quickly he began to raise his landing-gear tilting his nose up almost to a stall veering just past the buff-colored Salmon Building.

They say one of the secretaries in the Catholic War Relief Office on the 79th floor of the Empire State Building could see Colonel Smith’s Clark Gable mustache as the cockpit filled up with limestone and chrome mullions from around the building’s windows. Streams of molten high-octane fuel cascaded down the side of the building. The GIs on the deck of the troopship on the Hudson shouted, The Japs are bombing New York with V-2s!
Read more… 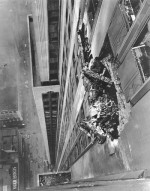 And here’s the incredible photograph that New York Times photographer Ernie Sisto took, hanging out the window from one of the floors above where the bomber crashed.

It’s possible that so few people remember the crash because just a week later, the U.S. bombed Hiroshima.

Did an elevator operator survive an 80-story fall?

She did. The photo below is of her recovering in the hospital.

Here is an excerpt from Betty Lou Gower Oliver’s obituary:

As a young 20 year old bride, Betty Lou Oliver was the elevator operator of elevator #6 in the Empire State Building when Lt. Col. Willian F. Smith’s B-25 hit the north side of the building between the 79th and 80th floor on July 28th, 1945. Seriously injured, she was put in an elevator for evacuation to medical help. … The car and elevator operator plunged 1,000 feet (75 stories) into a sub-basement.

The freefall of the elevator was broken by the massive coils of cables that had fallen to the bottom of the shaft. Despite suffering a broken back and legs, the operator survived. She had to be cut from the mangled wreckage. July 28th was supposed to be her last day on the job.   She recovered in less than eight months, and returned to Ft. Smith, AR, with her husband Oscar Lee Oliver. She had three children and seven grandchildren. She died November 24, 1999.

Was there a second survivor in the elevator?

Is Higgs Point in the Bronx a real place?

The details of the neighborhood are entirely fiction, but geographically the place exists.

Higgs Point is based loosely on a neighborhood called Harding Park, shown in this 1927 map.

It’s in Clason Point at the southern tip of the Bronx and across the water from LaGuardia, where the East River meets the Long Island Sound. Like Higgs Point in the book, it has a tidal marsh, lagoons, and an anomalous collection of 1920’s bungalows and summer houses lined up on narrow streets, and a fantastic view of the Manhattan skyline.

A huge bonus was the neighborhood’s history. The indigenous Siwanoy Indians, who were driven from the area in the 1700’s, called it Snakapins, meaning “land between two waters.”

At the turn of the 20th century, ferries brought summer visitors there from Queens to swim and camp on its beaches, play at its amusement park, and gamble and carouse at its saloons and casino.
Read more…

Was there really a Thomas Higgs?

Yes. Thomas Higgs owned about 100 acres of beachfront property where he began leasing tents to summer visitors — those became known as the Harding Park bungalows. After World War II, the tent platforms were turned into permanent residences. But he was not a crook… at least not as far as I know.

Was there an amusement park there, and was there a catastrophic Ferris wheel accident?

Yes, and yes. If you look carefully in this old postcard, the Ferris wheel is off to the right. The pool was called “the Inkwell” because its water was that dark (it came right out of the East River.)

From the New York Times:

Gale Wrecks Huge Machine
Six persons were killed and twenty seven are known to have been injured many of them dangerously, when a Ferris wheel, seventy-five feet in diameter, was blown over in Clason Point Park late yesterday afternoon in the most disastrous storm in the history of New York City. The wheel was hurled from its supports to the beach ten feet below, and those in the baskets were tossed out and crushed under a tangle of steel and wood.

Did the park have an Indian head gate?

No. The Indian head gate to “Snakapins Park” in THERE WAS AN OLD WOMAN is inspired by the fantastic gate to Luna Park, visible today across the Sydney  Harbour.