So I asked myself, “Who would buy a year’s supply of freeze-dried food?”

The inspiration for “Come and Find Me” came to me while I was procrastinating, wasting my time on the Internet just checking out what the latest great buys were from Costco. There I tripped over an ad for a year’s supply of dehydrated and freeze-dried food.

The photo showed a pyramid of cans in lovely pastel colors. 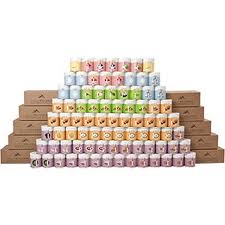 Chirpy ad copy explained: “…this package will give you variety, nutrition, and peace of mind.”

Now maybe if I lived in earthquake central or a flood plain I might have sent in my check for $999.99. Instead I sat there trying to imagine who in the world would see 84 gallon-sized cans with a shelf life of up to 25 years as the ticket to peace of mind?

The answer was a recluse who is afraid to leave her own house. Someone who’s been traumatized.

As I gazed out my office window, looking at the one-story ranch house next door, I imagined that the person lived there. As I was watching a UPS truck pulled up to make a delivery, and I realized that package deliveries would be the character’s lifeline, delivery men (they’re usually men) would be the only people to whom she readily opens the door.

Within a day or so, the character of Diana Highsmith had taken shape. I knew she was a former hacker who once ventured out into the world fearlessly. Her trauma, I decided, was the sudden death of her lover and best friend who fell when they were climbing in the Swiss Alps.

I knew just what Diana would do when she returned home. She’d grieve, fall into a deep depression, and months later climb out of it and create a life for herself on the Internet while barricading herself behind locked doors, fire walls, and security systems. But instead of hacking, she’d make a living protecting companies from just the kind of mayhem she and her lover used to wreak.

I envisioned her setting up her business at home, safe in her pajamas and slippers, while “living” on the Internet in a 3-D virtual world where she could conduct business meetings, investigate security breaches, and climb the Alps without ever setting foot outside. It had to be a world where she could hang out with other avatars–friends she’s never met in person. Where she could shop for virtual clothes for her avatar or real clothes for herself–which immediately suggested to me the idea that she might buy herself the same outfit her avatar wears, and maybe, just maybe, wearing that outfit would help her step out into the real world.

What I didn’t know was whether such a place existed.

I quickly discovered that there are a number of virtual worlds out there. The one called Second Life fit the bill. I called my version of it OtherWorld, and there I had Diana create an alter ego, an avatar to represent herself.

To make my virtual world feel authentic, I realized had experience Second Life first hand. Armed with enough information to be dangerous, I created an account and logged into Second Life. First, I created an avatar.

That much was easy. Moving her around was not.

I’m not a gamer, so I’m pathetically inept at the fine art of using a mouse and arrow keys. I knew my avatar could walk, run, fly, sit, and teleport, but I couldn’t keep her from bumping into furniture. Once I got her sitting on a chair I had to find HELP to figure out how to get her up and moving around again.

It was exhilarating when I finally got her aloft, watching like I was perched on her shoulder (think: Harry Potter on the shoulders of the Buckbeak the hippogriff) as she soared over the island at the entrance to Second Life.

Not so exhilarating was when, seconds later, she plunged into the virtual and very blue ocean. I actually found myself gasping for breath, then panicking when I couldn’t quickly get her out.

It was apparent that relying on my own experience to learn about Second Life would take forever — or virtually that long.

So I took a shortcut. I found a few experts who play and work in Second Life, generous souls who let me ride shotgun while they went about their business in 3-D virtual reality.

Among other things, I learned that a good percentage of men with accounts on SecondLife have female avatars. I learned that even bucolic corners of the virtual world could be infested by “griefers,” mischief-makers who enjoy raining down toasters or flying phalluses or springing traps, and how genuinely terrifying it feels to have a cage dropped down on your avatar even when you know it’s “only a game.”

While in most parts of Second Life, avatars can’t get hurt, other places are “damage enabled.” In combat sims, avatars compete against one another with awe-inspiring weapons. It’s hard for an avatar to get completely destroyed, but while I was writing the book I found a news article about a wife who managed to kill her ex-husband’s avatar after he divorced her.

The more  I learned about Second Life, the more I started to feel like a kid in a playground loaded with new toys. I had to pick and choose (falling toasters or flying phalluses?) among them. I also had to sand down my geeky edges, realizing that most of my readers are not nearly as fascinated by technology as I am.

I was thrilled when the Booklist reviewer called the novel “a suspenseful tale of high-tech skulduggery that even low-tech readers will appreciate.”

2/27
2020 St. Augustine Author-Mentor Workshop provides an ideal mix of experienced professionals...
3/05
At 7 PM at An Unlikely Story bookstore in conversation with
5/08
Hanson Public Library 6:30PM, Hallie talks about CAREFUL WHAT YOU WISH FOR